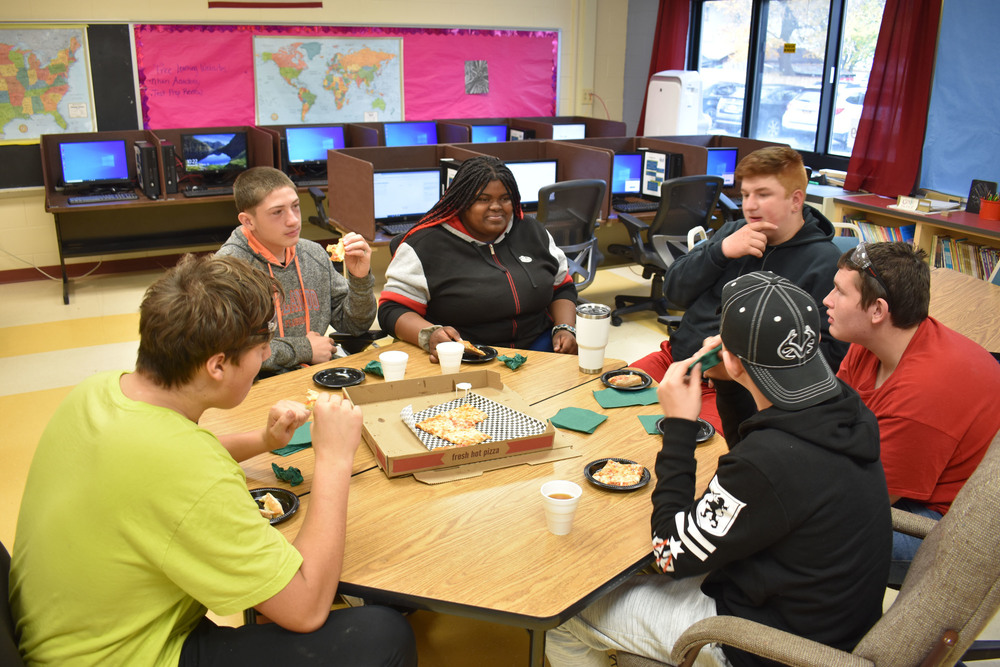 ILION – When the need arose for a computer lab for Herkimer-Fulton-Hamilton-Otsego BOCES Adult Education and Adult Practical Nursing Program students at the Remington Educational Complex in Ilion, the programs turned to high-schoolers down the hallway for help.

Local students in the Pathways Academy at Remington’s Trade Industries II class designed and built dividers for the computer lab because it will be used for testing and connected them to large tables.

From the students’ work – along with refurbished computers, donated chairs and additional efforts – a new computer lab was born.

“It may seem a bit home spun, but the kids had a learning experience, and we all worked together,” Herkimer BOCES Adult Practical Nursing Coordinator Sara Nicolette said. “End result is we now have a nice 10-unit computer area for both LPN and Adult Ed students. A win-win all the way around, and it is not just functional, but it looks nice.”

Nicolette hosted a pizza party on Wednesday, Oct. 30, for the Trade Industries II students who worked on the project and others who helped create the computer lab. Students also received certificates of appreciation and were able to see the completed lab for the first time.

After Nicolette identified the need for the computer lab, she reached out to Spatto and Herkimer BOCES senior microcomputer specialist Brian Keeler about doing a refurbishment project. Keeler refurbished the existing computers and located an extra one, and Spatto set out to work on the dividers with his students.

Trade Industries II students measured the tables, designed the dividers, created a list of supplies for the adult programs to purchase, built one divider first as a test, made adjustments, built the rest of the dividers and connected the dividers to the tables, Spatto said.

“Anytime I can do a project like this with community-based work, I do it,” he said, noting that such projects are beneficial for students. “They can see the result of it. They’re basically working with the community more or less.”

Trade Industries II builds off of what students learn in Trade Industries I and involves more customer-based work and large project work, Spatto said. Students work on a variety of projects. For example, the after finishing their work for the computer lab, students worked on a motor, he said.

“It all depends on what customers have a need for,” he said.

The students not only enjoyed the pizza party, but also liked seeing the completed computer lab.

“It feels great to know that students are going to use them, and it’s going to keep on going and being used by others,” Naugle said.

Green also thought about how the tables and dividers will be beneficial for adult students for a long time.

“They’re probably going to be here for 20 years down the road still,” he said.

Wildey said there were some challenges along the way such as the length of nails to use, but everything turned out great.

“It looks perfect,” Wildey said. “I’m glad about how it came out.”

Covey said it feels good to know they are helping out the adult students.

“Hopefully it works out well for them,” he said.

Covey said doing the project and other customer-based work allows students to practice skills that could come in handy.

“It will be helpful for jobs we might want to do,” he said.

Even the tables in the computer lab were previously donated by an insurance company, and Nicolette reached out to Rachel Daughtry, a director at Compassion Coalition, and was able to get the chairs donated.

Compassion Coalition, a nonprofit, donated $50,000 last year to 60 schools – impacting more than 30,000 local students. Compassion Coalition purchases about 80 percent of the products it donates, Daughtry said. For the other 20 percent, the nonprofit works with national companies to help the companies’ donated products reach schools that need them, she said.

Daughtry, who attended the pizza party, said she was happy to see how the computer lab turned out.

“It’s phenomenal,” she said. “I love it. I love the new opportunities this has created and the sense of accomplishment for the students. It’s something tangible they can see and be proud of.”

A newly constructed computer lab at the Remington Educational Complex in Ilion was built by students in the Herkimer-Fulton-Hamilton-Otsego BOCES Pathways Academy at Remington Trade Industries II class for Herkimer BOCES Adult Education and Adult Practical Nursing Program students who also are based in the same building.