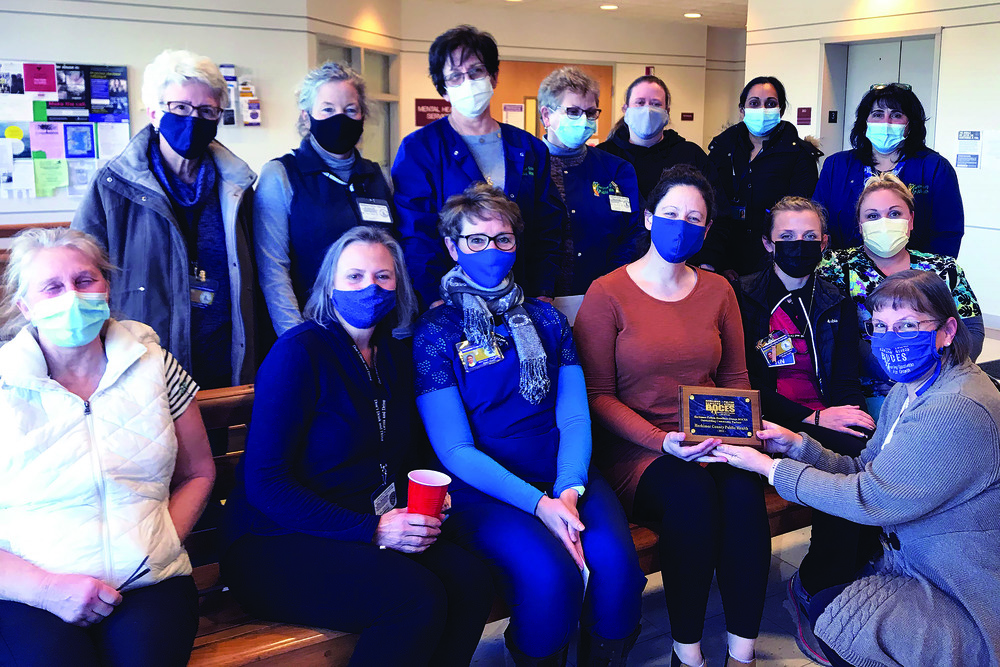 “Ever since last March, you and your team have stood shoulder-to-shoulder with BOCES and all the schools in our region to mitigate the effects and spread of COVID-19,” Sherwood said. “I appreciate all the phone conversations around protocols and that you reach out to all the schools whenever you are needed –nights, weekends, holidays – when the community needs you, you are there.”

Cain said receiving the award at a time like this makes it extra meaningful.

“I think that especially given the seriousness and the heavy weight that everybody’s been living under for the past year, any kind of happy news is wonderful,” she said. “And then on top of that, anytime people are really stressed or frustrated or scared, the negative emotions tend to be the ones we hear a lot more, so being recognized for maybe doing a good job is always a good thing, but it definitely is even more impactful right now.”

The importance of this partnership made itself clear starting on March 13, 2020, when Herkimer County Public Health Department officials and superintendents in the Herkimer BOCES region met in-person at Herkimer BOCES to discuss COVID-19 for the first time.

Cain was on maternity leave but on the phone with then-Acting Public Health Director Diane Ward, as a decision was made to initially close schools through spring break. Meetings since then have been held virtually with BOCES officials and superintendents from the BOCES region and Town of Webb Union Free School District.

That first meeting generated familiarity and trust that everyone could speak openly and honestly in the months to come.

“It was always really seamless,” Hutchinson said. “And they’ve always been really open to – the overall goal is having the best educational experience for kids that we can while keeping them and the community safe.”

Cain entered the COVID-19 discussions then, and throughout the year since, well aware that school officials were facing concerns such as maintaining safety, allowing staff to continue working and keeping students on track academically.

With both Public Health and school officials facing heavy responsibilities, the meetings were approached with mutual respect and a desire to stay on the same page regionally, Cain said.

“I think that’s really what shines through because things aren’t so scary when you know you’re going into something with partners who are willing to stand strong with you,” Cain said.

“We would have obstacles and we would have to try to figure out how to deal with them, but because we had that connection at the health department, it was never just like we were trying to throw things at the wall and see what would stick,” he said.

‘The trust and the respect’

Cain said a lack of clarification from the state and federal levels sometimes made it challenging to be as helpful to schools as she wanted to be, but she focused on being clear about where things stood even if she didn’t have the answer yet.

Hutchinson said those conversations were very helpful especially in situations when trying to figure out something such as how to space out desks by 6 feet.

“They were really good to talk to about specific questions,” he said. “Once you start tipping over dominoes, the guidelines become a bit of a labyrinth.”

Public Health reviewing the reopening plan templates that Safety Services developed for districts was another especially helpful collaboration, he said.

“It gave everybody a nice starting place that was already approved by our local department of health,” he said.

Additionally, after BOCES and schools had their first COVID-19 cases in school, Public Health helped make things calm, organized and focused on what information was needed, Hutchinson said.

“When it happens that first time, everybody starts scrambling,” he said.

Cain said she intentionally kept the focus on information such as which students and staff would need to be contacted. She helped make sure school officials planned ahead, knew what information they would need and felt more prepared and better equipped to respond to positive cases.

It speaks to the trust and the respect that the school population also has with the actual school district.”

Public Health’s response to COVID-19 and partnership with schools has been a team effort, Cain said.

“We are what I like to say: small and mighty,” she said. “We are not a large department at all.”

Hutchinson said it was remarkable to see Public Health keep things running through so many challenges.

“They’re comparatively such a small department staffing wise that they’re really punching above their weight with this,” Hutchinson said. “They’ve been able to do testing, do contact tracing and quarantine orders and now doing vaccination clinics, and they’ve just been able to roll with it. I’m sure it’s been stressful and a lot of work on their end, but they just keep taking what’s coming and making it work, which is really impressive for that department.”

“My staff, I could never say enough about them to capture the dedication,” she said. “And that goes for my clinical staff and my non-clinical staff. It’s just absolutely amazing. The amount of loyalty to their profession and the amount of loyalty to their community that they have demonstrated not just on a day but consistently over the past year, I mean, that’s a marathon. That’s a long, long time. They’ve lost out on times with their families, they’re up at 11 o’clock at night returning phone calls or sending emails or checking in on people because they’re worried. If there was one thing that I wish people knew, it is how lucky they are to have such dedicated staff.”

Cain also said the Herkimer County Office for the Aging has been tremendously helpful with seniors, and Hutchinson said Joseph Angerosa, a state Department of Health employee assigned to Herkimer County as a school resource specialist has been great to work with as well.

Through frustrations with federal or state regulations rapidly changing and times of being overwhelmed due simply to a lack of hours in the day, department staff put forth the maximum effort, Cain said.

“I could not have asked for more from the staff,” she said. “I haven’t even had to ask. That’s, I think, the most amazing part is they’ve done it willingly. They’ve seen what needs to be done and jumped in. Herkimer County is very lucky to have the Public Health staff that they do.”

Cain said the partnership with schools has been very helpful for Public Health as well, and any praise for the department is directly reflective of schools and their staff.

“You can’t be a good partner unless you have good partners,” she said. “You can’t be everywhere at once, so having those people as part of your team, you could never do this alone. We couldn’t do it without them.”

Hutchinson said the partnership meant Public Health could feel confident that schools knew how to respond to COVID-19.

“Because we had that constant dialogue, everybody realized we were all working in everybody’s best interest,” Hutchinson said. “It was really about keeping the kids and their safety and their educational experience in mind.”

Cain applauded school officials for their willingness to shift on a dime and their patience and understanding when information from higher levels of government would keep changing. Their educational expertise and questions meant Cain and her department didn’t have to cover all the angles alone.

“Even though this was a public health issue, the schools were very, very strong supports to me as well in that regard – making sure that I didn’t misstep and that I didn’t overlook anything,” Cain said. “They challenged me and the information I was giving them, which allowed me to develop it more and understand it more myself and look at it from those different perspectives.”

Cain praised Sherwood for her abilities as a leader, convener, facilitator, organizer and force of positivity. She credited Hutchinson as doing an amazing job, keeping a positive attitude and being a helpful collaborator.

She hopes the community appreciates the value of local districts committing to teamwork, consistency and communicating with families throughout the pandemic to reduce confusion. She said she learned from seeing BOCES region superintendents working together, challenging each other, keeping the same goal and valuing the strength of their team.

“I hope I had some growth too from being involved in that kind of dynamic,” she said. “We have great districts in our county, and I’m very proud to be associated with them.”

Hutchinson said he knew the schools and Public Health had been working closely together when a receptionist at Public Health started to recognize his voice.

Having such a strong partnership through dealing with COVID-19 was very valuable, Hutchinson said.

“It’s just really important,” he said. “They made this a lot smoother.”

Public Health previously had some degree of relationship with most local schools and knew the right people to contact, but the partnerships and communication are now at a different level, Cain said.

“I have grown to really respect and value the relationships that have developed through this,” Cain said, “and I feel like those partnerships have just grown some very deep roots now, which is a real silver lining to a challenging time.”

It’s easy to have good relationships when times are easy, but they mean more during a difficult period, Cain said. She expects the strengthened relationships to continue.

“It’s like an expansion of the team here,” Cain said. “We’re all kind of melding together at this point, and it is just stronger for all of us.” 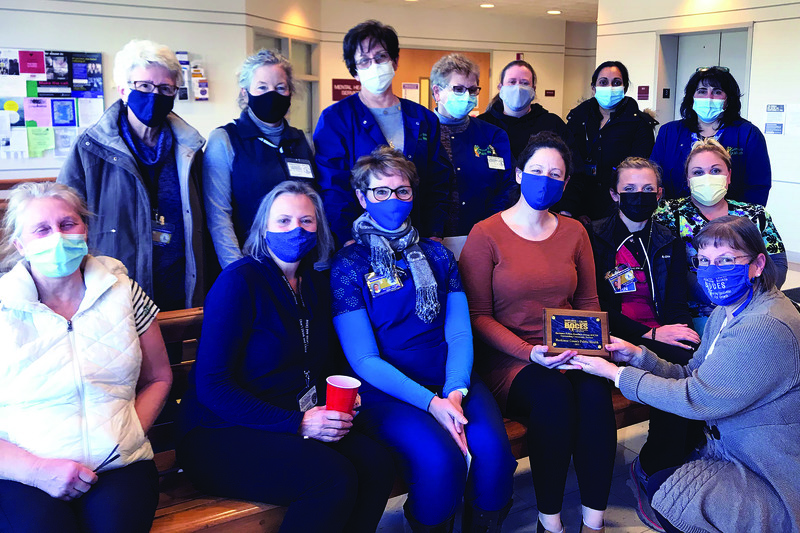 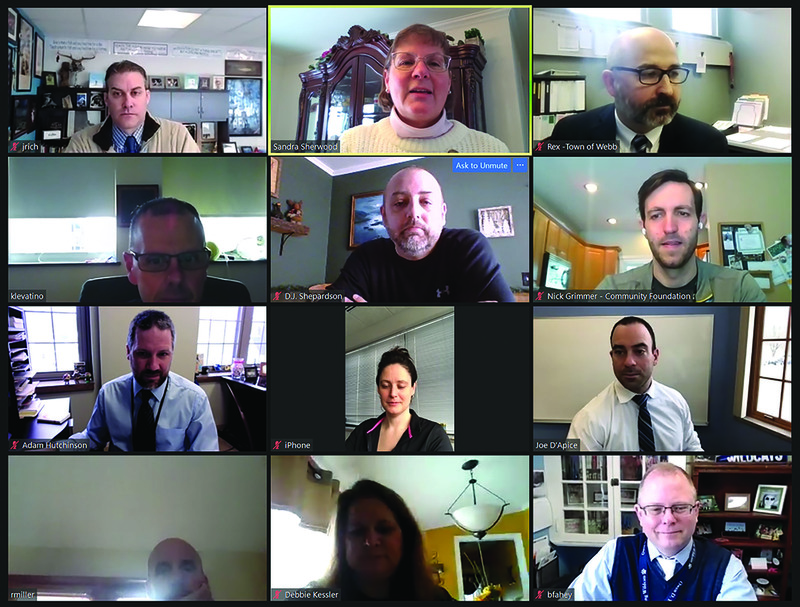