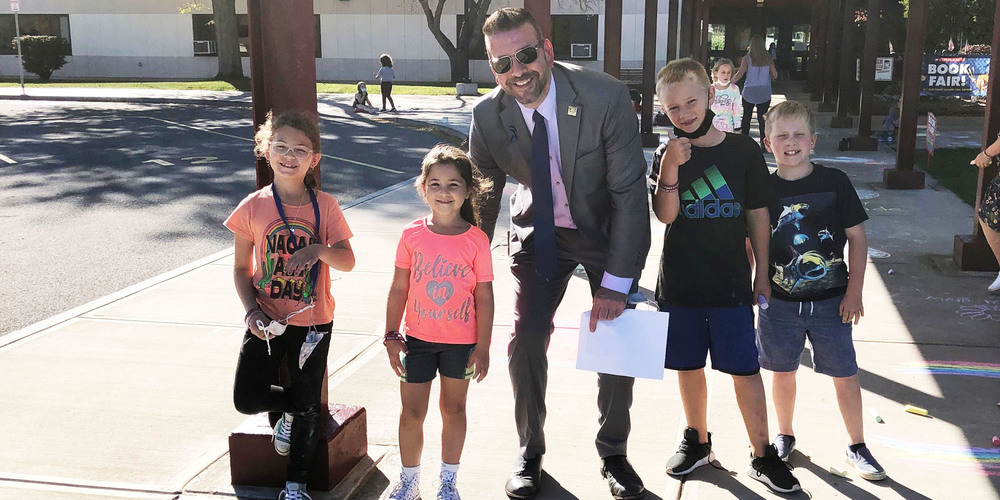 A cross-age mentoring program developed by Frankfort-Schuyler Central School District Superintendent Joseph Palmer is having a growing influence in the region and could potentially continue expanding to other parts of the state and beyond.

The program focuses on character education through having older students make connections with younger students. The older students visit elementary classrooms, read to them and help teach them about respect, responsibility, trust and citizenship.

“You start to see the kids pick up on that language,” Palmer said. “That makes you know it’s starting to become ingrained into your day-to-day operations.”

Palmer recently presented at the New York State Council of School Superintendents 2021 Fall Leadership Summit about Hi-5 Friends, the program he first launched at his previous school district. He is now integrating a version of the program into efforts that were already taking place at Frankfort-Schuyler.

Hi-5 Friends core principles such as the character traits of respect, responsibility, trust and citizenship initially guided Palmer’s work as a fifth-grade teacher in the John F. Kennedy Elementary School in the Kingston City School District.

As a teacher, he believed in ideas such as that it’s not just about the curriculum but how you act and not just about what you teach but how you teach it. Through his teaching – as well as coaching basketball – he emphasized character education, aimed to help students break the cycle of poverty, checked in on students, assisted students with staying on the right path and helped them with setting goals.

He provided particularly strong mentorship to three students – two fifth-graders and a seventh-grader he coached in basketball. Palmer provided support from the classroom to the basketball court to life in general. That bond grew, and they became like big brothers to Palmer’s daughters. Palmer has stayed in touch with the students throughout their successful lives, and they continue to visit each other.

Palmer later requested to move from teaching fifth grade to first grade because first grade would give him a chance to effectively influence students earlier in their lives. He next became the math coordinator for Kingston City School District and then principal of Harrison Avenue Elementary School in South Glens Falls Central School District.

As principal, he put the values he believed in as a teacher into a children’s book, “Hi-5 for Bulldog Pride,” and created the Hi-Friends cross-age mentoring program. Teachers, parents and students contributed to the book – including a parent graphic designer who illustrated it.

Impacts of Hi-5 Friends started showing up in the elementary school – such as fifth-graders picking up in the cafeteria and helping out.

“It was kind of like truly taking ownership of their school,” Palmer said.

The Hi-5 Friends program works by having older students visit an elementary classroom and read “Hi-5 for Bulldog Pride” to the younger students and talk to them about the core values.

Depending on teacher preferences, the first visit can also include some related activities such as BINGO and card games. It’s typically anticipated that the initial reading will lead to additional visits for activities such as reading other books that touch on the core values of Hi-5 Friends, becoming reading buddies with students or helping with mathematics facts, Palmer said.

The program proved to make a big difference for both the younger and older students, Palmer said.

“The power is in the cross-age mentoring,” he said.

Younger students benefited from having mentors and learning the positive character values. The older students felt empowered by helping others and improved in attendance, behavior and academics, Palmer said.

One example is a high school student who went from a point of standing on a desk yelling at a teacher before Hi-5 Friends to turning things around and pursuing a career path of working with children, Palmer said.

South Glens Falls Central School District was named by the Character Education Partnership, now known as Character.org, as a National School of Character and New York State School of Character. This came with a grant, a banner and the opportunity for Palmer to do a presentation in Washington, D.C. The Russell Sage College Academy for Character Education also gave Palmer an Administrator of the Year Award, and this led to other conference opportunities.

“That really opened doors for us,” Palmer said, noting that the conferences attended due to the awards allowed district officials to learn from others and gain additional resources and ideas. “Then we say, ‘How can we implement these here?’”

Hi-5 Friends and ideas learned at conferences became part of the culture at South Glens Falls during the 13 years Palmer was a principal there.

Palmer stayed in that role at Schenectady until accepting the position as Frankfort-Schuyler Superintendent in 2020.

As a superintendent, operating the products connected to Hi-5 Friends isn’t something Palmer wanted to do, so some of his colleagues turned Hi-5 Friends into a company, and it now operates as its own entity, Palmer said.

Hi-5 Friends fits with programs and initiatives in place at schools, so it becomes different for each district, Palmer said.

“It’s kind of organic in that it evolves naturally,” he said.

That has been the case at Frankfort-Schuyler as well, Palmer said.

“It fits perfectly with what drew me to Frankfort-Schuyler and what the district is already doing,” Palmer said. “They’re focused on serving the students. It’s been exciting to build on what they’ve already done.”

The Hi-5 Friends program is partnering with existing Frankfort-Schuyler programs including the Friends of Rachel Club, K-Kids Club and Builders Club, Palmer said.

During the 2020-21 school year, Palmer’s first at Frankfort-Schuyler, he did the classroom visits to read “Hi-5 Friends for Bulldog Pride” and related activities himself as a way to introduce the program and get to know the teachers and students better.

This school year, school social workers, guidance counselors and the family school and parent navigator are involved in the planning. Teams of students from fifth grade, eighth grade and 12th grade will be assigned to classrooms from prekindergarten to second grade, Palmer said.

Collaboration among a cooperative community, parents, students, teachers, staff, administrators and the Board of Education is key to making the program work, he said.

“We cannot do any of this without amazing kids and that partnership with the parents,” he said.

New banners connected to the program were purchased because seeing the images and messages gives a sense of pride and helps integrate the values into the school culture, Palmer said.

In a related effort, the district is also focusing on wellness for staff with monthly, voluntary, staff events after school – with activities such as functional fitness, cornhole, board games, Lego Robotics, a cooking challenge and more, Palmer said. This will give staff the opportunity to exhale and form bonds with co-workers, he said.

“It’s about relationships and connections,” he said.

The 2021 Herkimer BOCES Elementary Summer School was a five-week program operated through a partnership with Frankfort-Schuyler and Richfield Springs. The program helped students address academic gaps in mathematics and English language arts, and it focused on enrichment through cross-age mentoring based on Hi-5 Friends. Fifth-graders and sixth-graders in the program visited and mentored younger students in the program.

Positive activities connected to Hi-5 Friends also were conducted such as a “blooming with respect” art display of a flower garden, Palmer said.

Hi-5 Friends also served as the basis for a new Herkimer BOCES cooperative service – or CoSer – as well. School districts can contract with Herkimer BOCES for the service, which provides professional development to students and staff about implementing Hi-5 Friends and allows for bulk purchase of Hi-5 Friends resources. The resources can include books, journals, stickers, games and more, Palmer said.

“It allows you to personalize it to your classroom or your school or your district,” he said.

The professional development included in the CoSer teaches a team of students about leadership and other employability skills that are helpful for Hi-5 Friends. The students then work with teachers to provide cross-age mentoring to students at their school.

Each district, school or classroom can turn the program into what is most helpful for their needs, and the goal is to have both the older and younger students influence how the program operates, Palmer said.

“All we do is provide the vehicle, and then we just let go,” he said.

Palmer said it was humbling to represent Frankfort-Schuyler and the Herkimer BOCES region at the NYSCOSS summit. He wanted to speak about Hi-5 Friends at the event so that any interested schools can implement the program, he said.

“This is just another tool in your toolbox to better help your students and to help your district,” Palmer said.

Palmer also looked at attending the NYSCOSS summit as an opportunity to help Frankfort-Schuyler by hearing from a variety of leaders with great ideas and strategies.

“I’m just gobbling that all up and saying, ‘How can I bring that back to Frankfort?’” Palmer said.

Others looked to Palmer’s presentation in the same way.

A school superintendent from Long Island commented to Palmer during the NYSCOSS event that his district has older students do tutoring for younger students but is missing the student-to-student connection aspect that Hi-5 Friends focuses on.

Making those connections first through older students visiting to read the book and then growing from there is key to making Hi-5 Friends successful, Palmer said.

The NYSCOSS presentation could lead to Hi-5 Friends influencing programs in additional parts of the state, and Hi-5 Friends has already started expanding into other areas – including Oneida City School District, where a version of the program was previously presented to teachers and put in place.

Palmer said he would love to see a grant someday provide funding to make Hi-5 Friends free to every school in the country.

“That would be my dream,” he said.

Hi-5 Friends pulls from the study of how having at least one caring adult in a child’s life can make a huge difference and of how children are more likely to face difficulties in life the more adverse childhood experiences – or ACES – they have, Palmer said.

Overcoming ACES is currently particularly challenging due to the impacts of COVID-19 on students’ lives, Palmer said.

“Which is why this program is even more important now – because our families and our kids are struggling,” he said.

When Palmer was asked if he ever sits back and thinks about all of the students who have been and will be impacted by the program he started, he said maybe he should, but he hasn’t. Students, parents, teachers, staff, administrators and school board members are the champions of the program, he said.

“That’s what I stand back and am in awe of, and I realize I’m a single part in this machine that keeps churning,” Palmer said. “We serve students. That’s what we work for.” 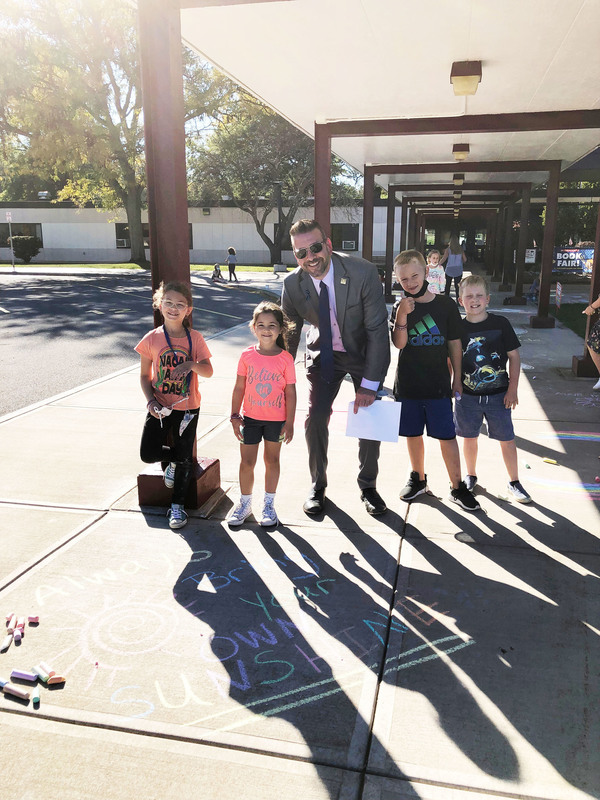 Frankfort-Schuyler Central School District Superintendent Joseph Palmer poses for a photo with Frankfort-Schuyler elementary students during a K-Kids Club activity on Wednesday, Oct. 13, to spread kindness by writing positive messages in chalk outside of the school. 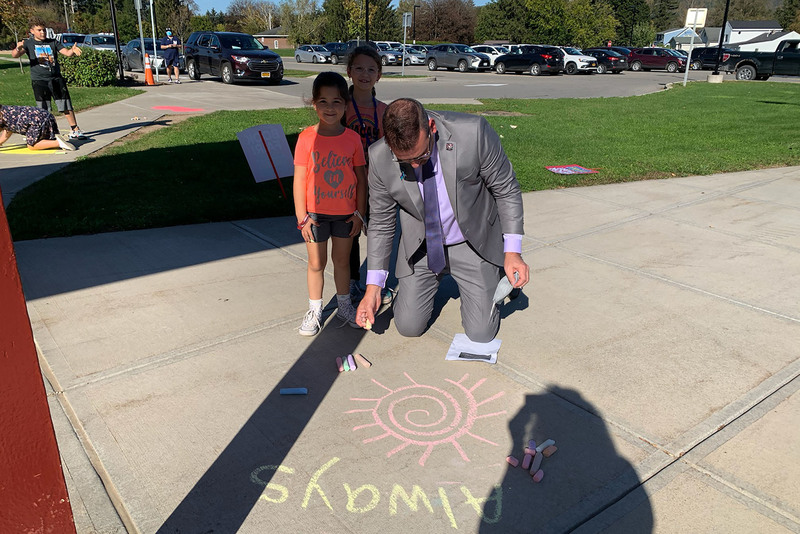