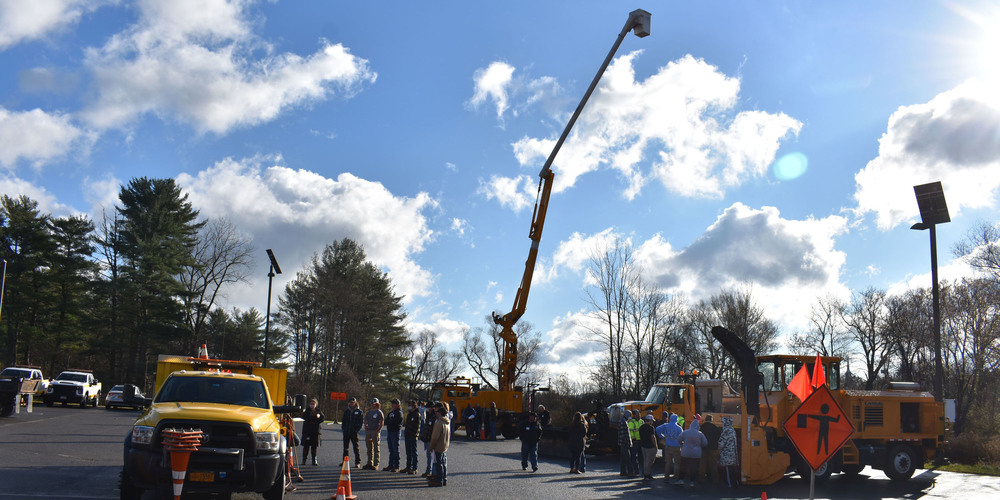 A towering bucket truck, a versatile welding truck, a large snow plow vehicle and a giant snow blower vehicle were on site recently as senior students from several Herkimer-Fulton-Hamilton-Otsego BOCES Technical Education programs were exposed to a variety of New York State Department of Transportation jobs.

Herkimer BOCES school counselor Meghan Dineen organized the collaborative event with DOT officials and welcomed students at the beginning of the day.

“They have so many opportunities for you to learn about today,” Dineen said, to the students.

Students rotated among six stations that were inside and outside the WEB Complex: Snow Plow and Blower, Tree Crew and Herbicide Program, Work Zone, Welding and Bridge Maintenance, Fleet Support and Equipment Management and Job Opportunities.

DOT officials also had a “lunch and learn” with Herkimer BOCES CTE instructors following the event.

Dineen said the idea for the day was to show students how BOCES programs can funnel naturally into DOT jobs. Some previous BOCES students participated in summer internships at the DOT and went straight into full-time employment after high school, Dineen said.

At the end of the day’s activities, Dineen addressed the students again.

“I hope that today was helpful for you,” she said. “Our goal is to help you try to imagine what after graduation looks like.”

“There are a lot of benefits to DOT positions,” Granato said.

Granato also spoke about how actions such as getting a commercial driver’s license and obtaining certifications can allow people to raise their position and salary at the DOT.

“You can move up further the more aggressive you are, the more interest you have in the position, the more initiative you take,” he said.

At the Welding and Bridge Maintenance station, Mike Kraeger, a bridge maintenance supervisor at the DOT, spoke to students about how he attended the Herkimer BOCES Welding program in 1988-1989, earned DOT certification and worked his way up through multiple jobs at the DOT.

Kraeger, who is also Dineen’s father, said he started at Herkimer BOCES because he didn’t want to be in a traditional school setting and wanted to pursue education for a trades job.

“I was in your shoes in my younger days,” Kraeger said.

Kraeger spoke more about job requirements and benefits and how you can take on a variety of tasks such as welding, plowing, tree cleanup, preventative bridge maintenance and fixing bridges.

“It’s a good opportunity,” he said.

DOT Assistant Director of Operations Brian Janis said the DOT’s goal in participating in the event was to help students learn about and potentially become interested in DOT careers.

“Basically, to give them awareness of what we do – the opportunities that DOT offers,” Janis said. “I think it’s really important just to give them the thought in the back of their mind – it’s a great opportunity.”

Working for the DOT offers competitive salary, upward mobility, benefits, retirement and the ability to work with your hands and see the results of your accomplishments at the end of the day, Janis said.

“When you add it all up, it really is a great place to work,” Janis said.

“They’re on the right path,” he said.

Herkimer BOCES Automotive Technology student Ryan Calhoun, of Poland Central School District, said he learned about what DOT workers do for their jobs and saw that a lot of mechanic work would be required with how many vehicles the DOT uses.

“It was intriguing,” Calhoun said.

Calhoun said he got a lot out of the event because of how relevant it was to what the students are learning at BOCES.

“It’s a good opportunity,” he said.

Herkimer BOCES Heavy Equipment student Allen Parker, of Central Valley Central School District, said he noticed there are a lot of jobs for heavy equipment operators to do.

“And that’s what I do at BOCES,” Parker said.

The large snow blower vehicle was his favorite thing to see at the event.

“It’s cool,” Parker said. “I’ve never seen anything like it before.”

“It’s really cool because you rarely ever see those,” Gilman said.

Gilman said she learned more about the trucks at the event, as well as about job benefits, the hours and time off and how you can set yourself up for retirement.

“I’m very much paying attention to it,” she said.

Gilman said there are many opportunities in trades jobs – including for female students.

“I feel like a lot of girls have been starting to integrate themselves into this sort of job because – one, they know a lot about it, and two, it’s actually really fun,” Gilman said.

Herkimer BOCES Heavy Equipment instructor Rick Reid said he was happy to have his students participate in the event because he likes to make them aware of as many job possibilities as he can.

“Just to expand their options is my biggest thing,” he said.

Reid talks to his class about the importance of not only salary but benefits, time off and setting yourself up for retirement.

For students who attend BOCES and learn a trade, they can move directly into good jobs right out of high school, Reid said.

“The trades, they’re important,” he said. “They’re jobs that people are starting to retire from, and we have nobody to replace them.” 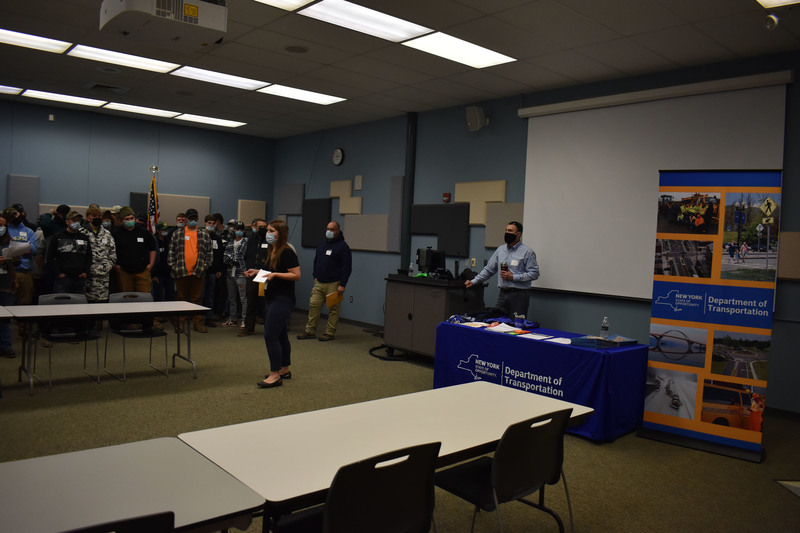 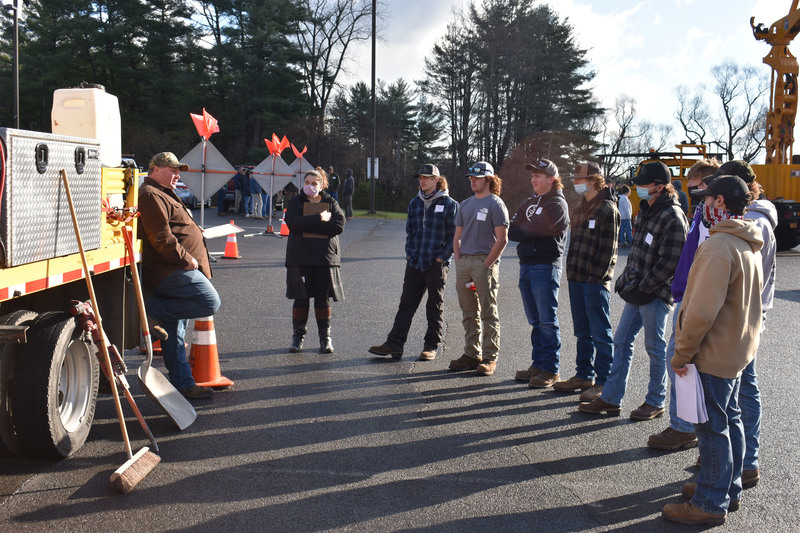 Mike Kraeger, a graduate of the Herkimer-Fulton-Hamilton-Otsego BOCES Welding program and a bridge maintenance supervisor at the New York State Department of Transportation, speaks to Herkimer BOCES students on Wednesday, Nov. 10, at an event at Herkimer BOCES for students to learn about DOT jobs. 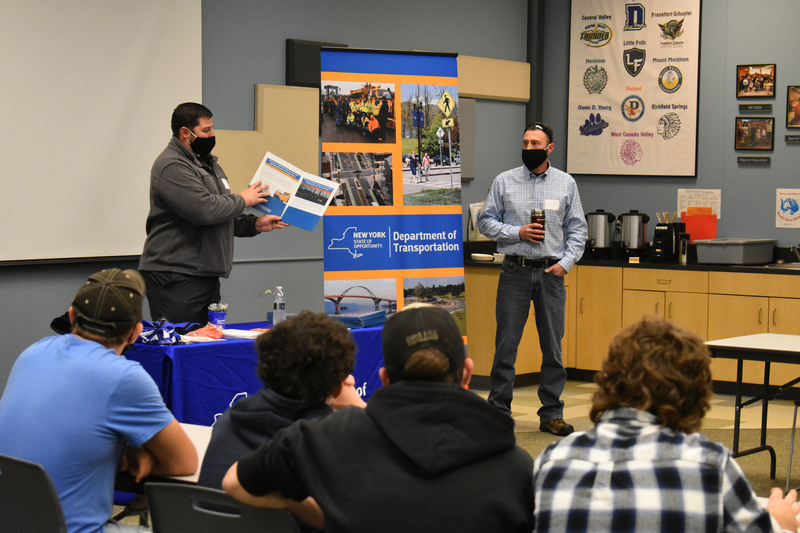